Alas poor Letter of Credit! I knew him well, Reader: a fellow of infinite costliness and complexity, but most excellent utility in enabling trade betwixt strangers.

How so the demise of the LC? He doth bestride the narrow world like a Colossus, and all petty alternatives walk under his huge legs and peep about.

In 2000 I made a presentation subtitled “Are LCs Past their ‘sell-by date’?” based on the premise that technologies were being developed that would make the Letter of Credit obsolete.

Why the passionate plea to consign LCs to the history books, considering they have been the back-bone of international trade for centuries? The answers to this question were summarised on one of the slides I presented:

Slide 3: Letters of Credit Are…

In 2001 I followed up with a presentation titled “Will Bankruptcy Swaps Kill Letters of Credit?” in the course of which I posited that Bankruptcy Swaps (then recently invented by Enron) provided a plausible and better alternative to LCs; suggesting that progress was being made towards the goal of making LCs redundant.

Sadly the Enron Bankruptcy Swap product turned out to be a sham built on misleading information, which only came to light when the group imploded and was declared bankrupt in December 2001.

All was not lost however since the quest was continued by honest and dedicated people.  TradeCard - founded by Kurt Cavano in 1999 and now part of GT Nexus - for example created a process that proved to be the genesis of the ‘BPO-Plus’ process that will oust LCs. I described the TradeCard process in a presentation delivered in Strasbourg in 2001 with the aid of this diagram: 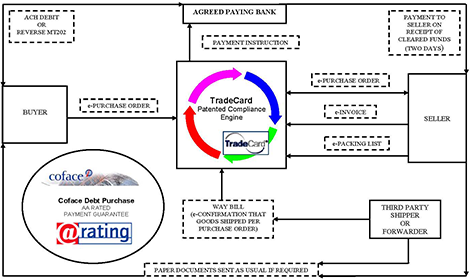 Mr Cavano, whom I had the pleasure to meet in New York in 2000, and all his contemporaries and successors who worked to consign LCs to history, have again proved that human beings are problem solvers. Give us a big enough problem and we will create a solution.

In my blog of June 3, 2012 I wrote: “The BPO promises to replace Open Account and simple Standby Letters of Credit (under UCP 600 or ISP98) payment terms, for domestic and international trade transactions relatively soon.”

The subsequent approval by the International Chamber of Commerce (ICC) and SWIFT of BPO rules for Banks – the Uniform Rules for Bank Payment Obligations (URBPO 750) – and the associated ISO 20022 message standards that cover trade document related data sets have made my prediction a reality.

Every business that accepts Standby Letters of Credit as collateral cover (security) for its sales transactions should switch to requiring Bank Payment Obligations (BPOs).

The reason to restrict the use of unenhanced BPOs to the replacement of Standby LCs is that BPOs on their own do not protect the buyer from supplier risks; risks such as the supply of incorrect goods, quality or volume/mass/number deficiencies, or out-right fraud.

The stand-alone BPO process is only suitable for well established relationships; that is cases where the buyer does not consider it necessary to ‘insure’ the risk that the expected goods will be paid for but not delivered. This exactly mirrors the situation when a buyer agrees to provide a Standby LC, rather than a Documentary LC, to cover its purchase of goods.

Either by using the SWIFT TSU (Trade Services Utility) link for delivery of SWIFT messages received by a bank straight into a company’s accounting and banking systems or a bank’s proprietary bank-to-client trade system, companies are able to capture a number of benefits from the BPO system; for example:

Banks offering BPO solutions will be able to reduce their costs vis-à-vis handling LCs, by avoiding the need to employ expert document checkers and virtually eliminating the documentary risks they would otherwise carry.

According to SWIFT as at August 18, 2014; “13 banking groups are live on BPO/TSU, including 4 of the top 10 Trade banks - based on Cat 7 traffic.  In addition 45 other banks are in the process of adopting BPO.” The point is that, if your house bank does not offer BPO services you should be able to find a suitable alternative bank, so there is no need to wait for a laggard.

The BPO process allows for all commonly used payment terms to be incorporated.

The Bank Payment Obligation (BPO) is an irrevocable undertaking given by one bank to another bank that payment will be made on a specified date after a successful electronic matching of data according to an industry-wide set of rules, namely the URBPO.

“The scope of the Uniform Rules for Bank Payment Obligations (URBPO) lies solely in the bank-to-bank space. …. URBPO are designed to operate in what is known as the 'collaborative' space as will any Transaction Matching Application (TMA) chosen by financial institutions (known in URBPO as Involved Banks) for a given transaction. URBPO do not cover the interaction between a bank and their corporate client.  It is for each bank, in what can be described as the 'competitive' space to offer (its) clients financing or other services and products based on the strength of agreeing to incur a Bank Payment Obligation (BPO) or through the receiving of one. URBPO indicate the separateness and independent nature of the BPO from the underlying sale or other contract.”

The BPO-Plus (BPO & Friends) will gradually but inexorably replace transaction related Documentary LCs over the next five years or less. The considerable rewards intrinsic to using BPO and electronic documents in combination are available to every trading partnership today; you should be benefiting.

As an example of a service that enhances the BPO process; “essDOCS supports Bank Payment Obligations (BPO) and related ISO 20022 messages, enabling shippers, banks and buyers to create baseline data as well as control the release of electronic bills of lading until a BPO match (is achieved).”
See: http://www.essdocs.com/products/cargodocs/bank-payment-obligations-bpo

A SWIFT presentation (reproduced here with permission) illustrates how the BPO-Plus combination works to effectively replace Documentary LCs, by providing the protection and financing possibilities required by both buyers and sellers. 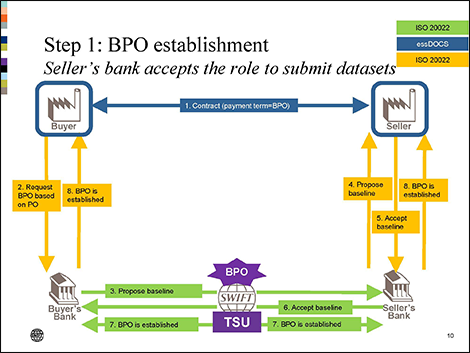 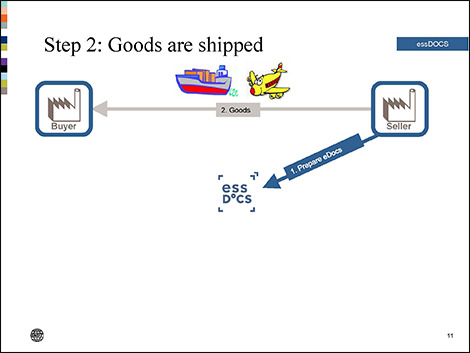 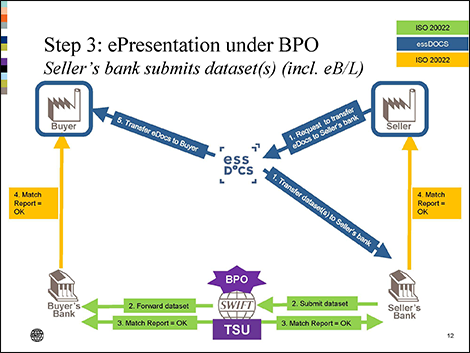 The electronic document management system provider – in this case essDoCS – holds the ‘original’ documents (including the all-important Electronic Bill of Lading) in escrow (trust) on behalf of the seller until the buyer’s bank accepts its obligation to pay the seller’s bank under the terms of the BPO.

In conclusion, it is now possible for sellers and buyers of goods and services to enjoy all the amazing utility offered by the Letter of Credit for past eons, without bearing the associated risks and costs. The dedicated efforts of bankers and academics to reform the LC, stretching back to 1933, are gratefully acknowledged, unfortunately however ‘the patient could not be saved’.

The first ‘four corner’ BPO live transaction (one involving a seller, the seller’s bank, the buyer, and the buyer’s bank) was completed in May 2014. Therefore there is no reason for you to ‘wait and see’ if the process works, it does!

Ron Wells is a B2B counterparty credit risk and trade finance practitioner and author of “Credit Risk Management – The Novel (Part One)”. This is not a text book, it is a story that follows the day to day work of a credit risk management team as they face and overcome various challenges. You are invited to ‘listen in’ to their conversations and read the outline of the solutions they employ. There is a parallel story that follows the adventures of James E Cricket, providing an undercurrent of twists and turns.

Ron also wrote “Global Credit Management – an Executive Summary” published by John Wiley & Sons.  His books are sold by Amazon.com and other retail outlets. He can be contacted via the website www.t3plimited.com or at ron.wells@barrettwells.com